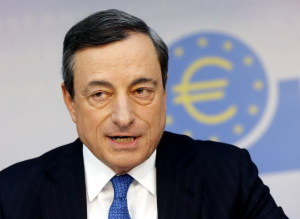 President of European Central Bank Mario Draghi speaks during a news conference in Frankfurt, Germany, Thursday, June 5, 2014. The European Central Bank has cut two key interest rates, one of them into negative territory — a highly unusual step that underlines the urgency of its efforts to keep the eurozone economy from sliding into crippling deflation. It reduced its main interest rate, the refinancing rate, from a record low of 0.25 percent to 0.15 percent. More drastically, it also cut the rate it pays on money deposited by banks from zero to minus 0.1 percent, an unprecedented step for the ECB that aims to push banks to lend money rather than hoard it. (AP Photo/Michael Probst)